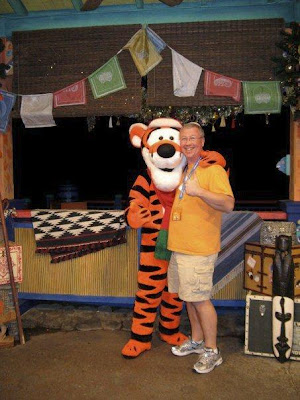 I think one of the base concerns for those who travel is the expense involved. Going places will cost money, and going to nice places will cost a lot of money. That being said, I was impressed that Disney didn’t gouge their visitors for every last nickel in their pockets.

Case in point, Disney permits you to bring your own food and beverage into the park. Because we have lived in St. Louis and have family that still live near St. Louis, our family has frequented Six Flags on several occassions. When we visit Six Flags we pack lunch in a cooler, exit the park and “tailgate” on the blistering asphalt. At Disney, however, we didn’t have to worry about smuggling sandwiches and bottled water in to the park. Like most public venues, Disney searches backpacks and drawstring bags. Got a sandwich? Not a problem! Got a bottle of water? No big deal! Packing a light lunch each day was permitted, and for a family of four, this amounted to savings in the neighborhood of $200.

Example two is photography. We happened upon a pavillion where Tigger, Pooh Bear, and Eeyore were available for photo ops with guests. Disney provided a photograher who would take a picture that was available for purchase. But we were also encouraged to use our own cameras as well. No purchase required and the Disney photographer even used our cameras to take pictures for us.

The final example is the Disney policy on the fast pass. At Disney there is no charge for fast passes on attractions (compared to the $70 per person fee at Universal Studios). The only rule is that you can only have one at a time.

These three simple gestures are examples of how to add value to an experience without conveying the feeling that the bottom line is the bottom line. Is Disney a for profit corporation? Absolutely. Do they convey that to their guests? Absolutely not.

I think churches and not for profit organizations can learn much from Disney. Disney doesn’t sell a product, it sells an experience. When we focus on the right things and significant things the money will take care of itself. How you deal with money reveals your true mission and purpose.