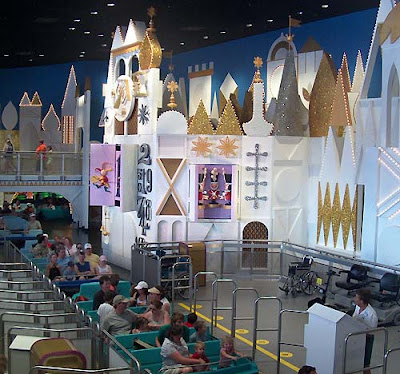 We spent our first day at Disney in its most storied and celebrated park: The Magic Kingdom. There we were able to see Disney at its best. We rode the classic rides, the most famous of which toured us through the seven continents where we heard dolls sing “It’s a Small World After All” in several languages. This was just a taste of what we would learn to be one of Disney’s most significant values…Think Globally!
Disney has made the world its platform, opening parks in places like Europe and Asia. But Disney has not just taken their brand to the world, the world has come “home” to Disney here in the USA. I didn’t keep official statistics, but I felt continually surrounded by tourists from foreign countries. I stood in a concession line with newlyweds from Wales. We rode a ride with a family from France. I had my picture taken with a family from Brazil celebrating a wedding anniversary. (That’s another story!) Between the attractions and the guests, I was reminded that I live in a small world that has shrunk even beyond the imagination of Walt himself.
If you haven’t noticed, our nation is changing. Rainer Research is predicting that our nation will turn caucasian minority by 2042. The preschool population of America will turn caucasian minority by 2021. Those events will presumably happen in our lifetime.
Jesus’ first post-resurrection challenge to his disciples was to take the news of his resurrection and think globally. Believers have maintained that challenge through our commitment to missions for nearly two thousand years. What makes today interesting is that we no longer have to think globally in strictly geographical terms. Technology and travel have shrunk the world and brought the world to our doorstep. Walt may not have forseen this, but Jesus did. Now, more than ever, we have to think globally. The world is coming “home.”