The following information was compiled and presented by Matthew Pierce in our weekend worship services on April 18-19, 2009. Matthew did his undergraduate studies and received a degree in Philosophy at the University of Southern Mississippi. He is presently a litigation consultant located in Des Moines, Iowa. His wife Rachel is a news anchor for ABC channel 5 in Des Moines.

Our first argument was given the name Ontological by Immanuel Kant, but the argument itself is attributed to St. Anselem, a philosopher from the middle-ages who was once the Archbishop of Canterbury. This argument attempts to provide proof of the existence of God through sheer deduction. The method used is reductio ad absurdum, and you can see why in this excerpt from Anselem’s text:

To put this in common English, the argument works as follows:

Next is the Teleological argument. The word teleological comes from the Greek word telos meaning “end” or “purpose”. Most people would know this argument as “Watchmaker Theory.” This argument attempts to provide proof of the existence of God through identifying universal order and design.

Perhaps you are familiar with the name Anthony Flew. Flew has been described as the world’s most notorious atheist. In 1950 Anthony Flew wrote an essay titled “Theology and Falsification,” which became the most widely reprinted philosophical publication of the last half century. That and subsequent writings were among some of the most cited arguments against the existence of God. At a symposium at New York University in 2004, after over 50 years of championing atheism, Flew announced that he had changed his mind. He attributed recent advances in DNA research as one of the major contributors to his reconsideration. Here’s what he said:

What I think the DNA material had done is that it has shown, by the almost unbelievable complexity of the arrangement which are needed to produce life, that intelligence must have been involved in getting these extraordinarily diverse elements to work together.

Now, from the very small, DNA, we are going to go to the very large. Have you ever considered just how big the universe is? 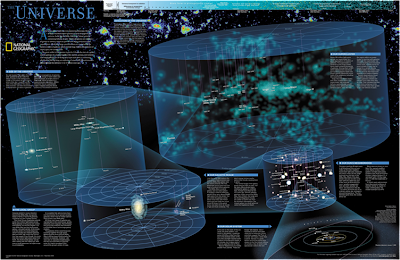 The third argument is the Cosmological argument which dates back to Aristotle. It states that everything that exists in the Universe is a result of cause. This cause and effect cycles back until it reaches the initial cause, which itself is outside of causation, which is God. One way to think about it is the domino effect. If a domino falls over, something caused it to fall, such as the domino falling behind it.

One of the most popular versions of this argument is the Kalam Cosmological Argument which deals more specifically with the temporal aspect. It proposes:

Now point two seems to be a given. Of course the universe began to exist. The truth is though, secular models tended to have the universe existing eternally, without beginning or end. The problem with the infinite existence of the universe is that science has been coming up with solid evidence that the universe did, in fact, have a beginning – the big bang.

Do you know who first proposed the big bang theory? Would you believe it was a Catholic priest? In 1927 Monsignor Georges Henri Joseph Édouard Lemaître published a physics paper that outlined what we now know as the Big Bang theory. This work would become influential to the work of Edwin Hubble’s Red Shift Argument that proves the ongoing expansion of the universe. The point for this purpose, however, is that atheism is now shifting away from the Big Bang Theory due to the lack of explanation as to who pulled the trigger.

The Kantian Moral Argument is somewhat different, in that it does not argue for the existence of God as much as the existence of an afterlife. The argument is based on things we experience in the world, such as good things happening to bad people, crime being beneficial, and the fact that life does not seem fair. If morality exists and adhering to such does not bring justice to us during our lives here on Earth, then there must be an afterlife where justice is served to those who have behaved in a moral way.

Some of the minor arguments include Pascal’s Wager, which suggests that it is rational to believe in the Christian God. In it, Pascal argued that:
1. If you believe in God and it turns out that God does not exist you have lost nothing.
2. If you do not believe in God, and there is a God, then you suffer eternal punishment.
3. If you believe in God and there is a God, you are rewarded in eternity.
4. Thus believing in the Christian God is a wise and rational choice.
One of the interesting features of Pascal’s Wager is that it is the only argument that is directed toward the existence of the Christian God. All other arguments in philosophy simply deal with the existence of a God.

Another minor argument is the argument from Miracles. A miracle is defined as and event performed by or involving a supernatural agency. If a miracle occurs, God must have done it. In order for God to do something, he must exist. Therefore, if God must exist, he does exist.

Intrinsic Probability simply states that 51% is all that it takes to win an argument. Therefore, it is more likely than not that God exists.

The final minor argument is Reformed Epistemology: belief in God can be rational even in the absence of evidence for God’s existence provided they (those beliefs) are (a) grounded, and (b) defended against known objections.

This presentation can be heard in its complete form via podcast by going to www.ashworthroad.com.