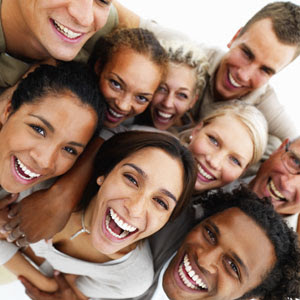 On Wednesday nights I’m leading a group in a study of the Fruit of the Spirit. Last night we spent some time talking about the second fruit mentioned in Paul’s listing found in Galatians 5:22-23: the fruit of JOY! As a part of the study I produced a quiz on laughter, based largely on the findings of Professor and neuroscientist Robert Provine. Some of the surprising findings of Provine include…
> People are more likely to laugh in groups than when they are alone,
> The person talking laughs 46% more than the person listening (does this mean I’m not as funny as I think I am??),
> Four times more laughter is triggered by bland phrases than formal jokes,
> Women laugh more than men, and
> Only 1 in 5 espisodes of laughter results from direct or intentional attempts at humor.
Poking around the internet via Google I also saw an amazing report that stated that babies laugh as early as 17 days old. But the one that troubled me most was the statistic that claimed that the average child laughs 200 times per day, compared with the average adult who laughs 15 times a day. I’m not about to claim that the last stat is bolstered in some heavily endowed scientific research, but when I think about it, its probably spot on.
As we age, life does get a bit serious. I just had lunch with my wife who works as a Kindergarten teacher in a nearby public school. As I arrived at her room, the class was preparing for lunch and reccess. Somewhere after that will come a “nap.” As I left I thought to myself that I wished someone would make me nap every afternoon for 30 minutes. But I digress.
The point is this. God has created us with the capacity to laugh. Though neuroscience cannot conclusively identify the location of laughter in our brains, it does exist from the get-go. We have been given this wonderful gift, but somehow our laughter has become rooted in circumstances and life events rather than from some contented place deep within our character. When we are not content within and are merely responding to external circumstances, the only place we’ll find laughter is in our manufactured worlds of entertainment and comedy. God has created us to laugh and to experience joy, and joy is an inside job.