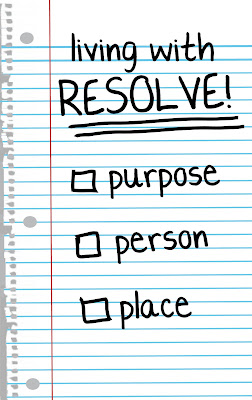 This year I’ve decided to move past resolutions and begin living with resolve. The word resolve is defined as “a definite and earnest commitment.” Maybe the difference between resolution and resolve is semantics, but the more I think about it, the more I believe I’m on to something. So rather than live in accordance to “good intentions,” I’m choosing to make some definite and earnest commitments.

The Old Testament character Abram (a.k.a. Abraham) is an example of a person who lived his life with resolve. His life is the basis of our inaugural 2010 sermon series. Last weekend, from Genesis 12:1-4, I posed three questions to help you move from resolution to resolve.

Question one: Are you aware that God has a plan and a purpose presently at work in the world?
God’s plan and purpose has been settled from eternity past to eternity future. His plan is revealed to us in time and space, but it’s not for time and space alone. It remains eternal in its scope and dimension.
Having said that, I think it’s fundamental that you realize that God is at work in the world around you whether you recognize it or not. For example, the air around is full of radio waves and all kinds of signals. You’re consciously not aware of these signals unless your cell phone rings or you tune in to a radio station or you open your laptop to search for a wi-fi network. The activity of God is like that. It’s around us everywhere all the time.

Question two: Are you willing to be included in the activity of God that surrounds you? God’s purpose and plan includes you. In the Genesis account, Abram was not seeking God but God was seeking Abram.
Abram had no idea that his part in God’s plan would affect generations to come. Little did he
know that the choices he would make would impact the world geographically and politically for generations to come, even to this present moment. What that means is that your life is a bigger deal than you may have originally imagined! God knows you and has chosen you to participate in his purpose for the world.

The final question is this: Are you ready to participate in God’s plan and purpose? Are you ready to accept his invitation?
One thing I learned from Henry Blackaby is that God’s call to participate in his purpose is simultaneous with his timing. When God speaks, it is a present tense moment and requires an immediate response.
Are you willing and ready? It takes both to be fully obedient to God.

As you think about 2010, think about what is stirring in your heart. That may very well be a part of God’s invitation to you to join him in his awesome work. What are you going to do about it?