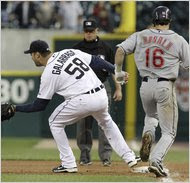 Major League Baseball fans have been treated to an extaordinary season. Although the season is barely two months old, fans have seen two perfect games, the first by Oakland A’s pitcher Dallas Braden, the second turned in last weekend by Philadelphia Phillies Roy Halladay. Prior to these two performances, Major League Baseball had recorded 18 perfect games in its entire history. But in the last two months, two more have been added. Last night should have been the third.
With one out to go in the bottom of the ninth inning, Detroit Tigers right hander Armando Galarraga coerced a ground ball to the right side of the infield from Cleveland’s Jason Donald. Galarraga hustled to first, handled the throw and stepped on the bag, ready to celebrate his landmark accomplishment. All that jubilation was quickly squashed as first base umpire Jim Joyce extended his arms to signify the runner was safe.
Immediate outrage filled baseball fandom as the replay showed the runner was safe. And not just safe…safe by a step and a half. It wasn’t a “bang-bang” play. It wasn’t a close play. The ump blew it extra large. Immediate sympathy gushed for Galarraga and the Tigers fans, appropriately so. I understand what its like to be on the wrong side of a horrible call. What self respecting St. Louis Cardinal fan doesn’t remember where they were when umpire Don Denkinger missed a similar call in game 6 of the 1985 World Series? Every Cardinal fan felt that call in the pit of their stomach for weeks.
But let’s pause for a reality check. Umpire Jim Joyce walked into the umpire room after the game last night, watched the replay of the call, and immediately went to Armando Galarraga and offered a tearful apology. While that may not erase the mistake that has by now been viewed by millions around the world, it does ease the sting. Jim Joyce is human and made a mistake. But the thing that sets Jim Joyce apart in my mind from most of the other humans who make mistakes is his humble willingness to honestly own his. He apologized and owned his stuff. What an absolute refreshing thing! Think about it…he made a mistake and acknowledged it. Seems like the right thing for him to have done. But all too often we ourselves may be a little too reluctant to follow suit. Our pride encourages us to look at our mistakes and either blame someone else or justify our mistakes with a bucket full of tired excuses. Our world is filled with cheap imitations of Arthur Fonzerelli’s who are unable to articulate the simple phrase, “I was wrong.”
I don’t know Jim Joyce. I’m not an apologist for Jim Joyce. But I’d rather have an authentic Jim Joyce than a fake anyone else I know. I can live with imperfect people, especially when they own their own stuff. Thanks Jim, for being real.