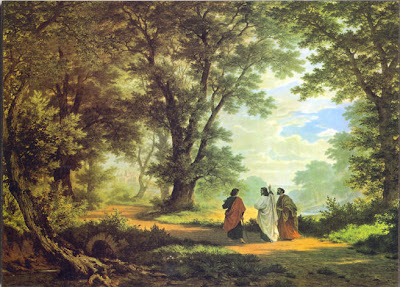 Upon arriving at Emmaus, the travelers offered Jesus food and lodging, a typical Jewish gesture. Jesus accepted the invitation, and they sat down to eat. It was at this moment that Jesus’ identity was disclosed. It is not clear why Jesus was given the task of pronouncing the blessing and breaking the bread. That job usually belonged to the host of the meal. Nonetheless, during the breaking of break their eyes were opened and Jesus vanished from their presence.

It is unclear as to how this disclosure happened. Perhaps it was in the way that Jesus prayed. It was customary for the bread to be broken as the prayer of thanksgiving was offered, so I suppose it’s possible that as Jesus broke the bread and offered it to the couple that the nail prints in his hands were revealed. However it happened, there was an instant recognition of Christ.

Any revelation of Jesus is bound to be life changing. His revelation brings transformation. I see at least three ways Jesus’ self-disclosure changed this couple’s lives.

First, they moved from doubt to faith. “They said to each other, ‘Didn’t our hearts burn within us as he talked with us on the road and explained the Scriptures to us?’” (Luke 24:32, NLT) As Jesus spoke the Scriptures to them, faith began to well up within their hearts.

Then, they moved from disappointment to hope. “And within the hour they were on their way back to Jerusalem.” (Luke 24:33, NLT) Even though night travel was dangerous and to be avoided, this couple left their home and returned to Jerusalem.

Finally, they moved from private conversation to public witness. “There they found the eleven disciples and the others who had gathered with them, who said, ‘The Lord has really risen! He appeared to Peter.’ Then the two from Emmaus told their story of how Jesus had appeared to them as they were walking along the road, and how they had recognized him as he was breaking the bread.” (Luke 24:33-35, NLT) The conversation they shared among themselves suddenly became a public witness. They had good news and were compelled to share it.

It was the same day, the same road, and the same town. But they were changed, all because they had seen the risen Christ.