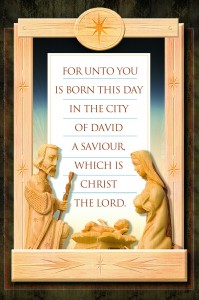 I can remember the first thing I ever wanted. I couldn’t have been more than 5 years old. I don’t really know how I came to want what I wanted. It could have been that a kid in school had one that he proudly displayed. It could have been that I saw it in the Sears and Roebuck “wish book.” I don’t know where the desire came from, but I know what I wanted. It was a Mickey Mouse watch. It had a bright red wrist band with a clock faced that bore Mickey’s iconic image. I could see myself wearing it, watching as his gloved hands would move perfectly across the clock to report the time of day.

When Christmas time came, I was alive with anticipation. I opened my presents, looking for the watch. One box in particular caught my attention. I eagerly opened the package to find a Cinderella watch.

It wasn’t what I expected. The store had made a shipping error, and within a few weeks I received the Mickey Mouse watch but it wasn’t quite the same.

That memory came to me this year as I re-read the story of the visit of the Magi to see the baby Jesus. These far eastern astrologers had seen a star and made their pilgrimage to Jerusalem to see the new “King of the Jews.” Upon their arrival in Jerusalem they made their way to the palace and then on to the throne room of Herod who received their visit. Imagine Herod’s surprise to hear of their inquiry about a new king. Imaging the Magi’s surprise to hear of his ignorance of such matters. Officials looked into the matter and discovered the prophecy that declared that the Messiah would be born in Bethlehem and Herod sent them on their way. When the Magi arrived they found a baby in a cradle, housed in a simple, small home. They followed a star, and at the other end of that star did not find what they expected.

We’ve all had those moments where we have followed stars and found cradles. Perhaps you followed a career path that looked promising only to have been downsized. Maybe you stood at a wedding altar with the love of your life only to stand before a judge’s bench. Possibly you ate in moderation and exercised regularly only to discover a threatening disease. You provided for and nurtured a child who wasn’t valedictorian, or captain, or homecoming queen.

What do wise ones do when they follow stars and find cradles? What did the wise men do?

First, when wise ones do not find what they expect they look for God. Wise men and women of every generation don’t panic when met with disappointment. They remain steady and say, “God is somewhere in this place.” Every major character in the Bible had the same experience that we’ve had. Remember, strong faith sees God in every situation be it good or bad. Weak faith only sees God in the good.

Next, when wise ones do not find what they expect they offer their very best to God. The wise men brought gifts for the new king. When the star led them to the simple home of a carpenter, attending to a young teenage mother and child, they didn’t withhold anything. They gave all without measure.